Jane P. Lord consults on public relations, media and communications at the Aurora Financial Group. This position is unique to Aurora within the norms of the financial services community. She has been an editor for Maine-based publications for more than 25 years and is currently editor at Current Publishing. She directed the news coverage and staff at the Morning Sentinel in Waterville, then managed the features coverage and staff at the Portland Press Herald/Maine Sunday Telegram. Jane came to know Charlie shortly after she moved to Portland. She began her eponymous public relations firm in 2000. During her career she has won numerous awards, including a first place in the newsletter category – for Aurora’s “Thoughts While Shaving” – from the Maine Public Relations Council’s Golden Arrow awards.

Jane and her husband, Robert, live in South Portland with an aging, wide-bodied dog and too many cats. Their daughter, Sarah, is an actress in New York City who has appeared in several Off Broadway productions, as well films, TV and commercials. 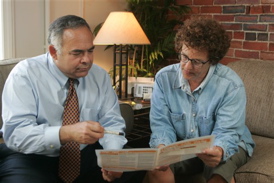 Jane working with Charlie on “Thoughts While Shaving”